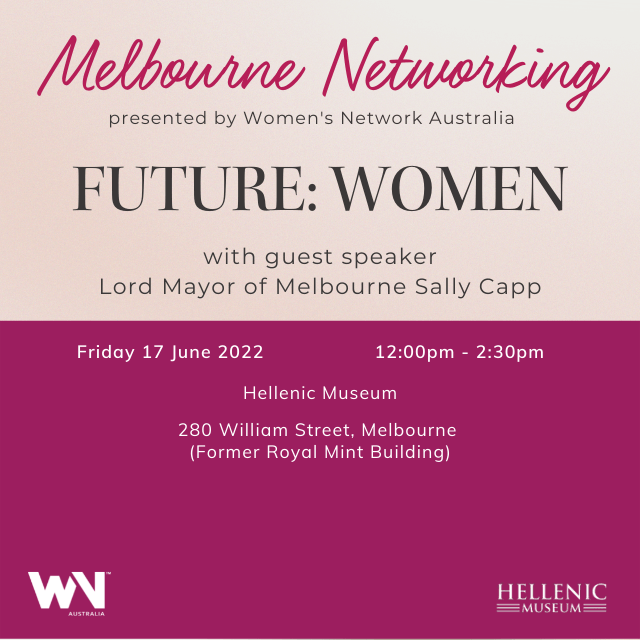 After being closed to tourists and visitors alike for longer than most other cities in the world, Melbourne is re-awakened and looking to the future.

Having just hosted the largest weekend sporting event in Melbourne’s history, attracting more than 400,000 attendees for the Formula 1® weekend, and with the announcement of the 2026 Commonwealth Games coming to Victoria, there are plenty of opportunities on the horizon for business in Melbourne.

Around 35% of Australian businesses are owned by women. The growth opportunities are being taken up – slowly – which is why Women’s Network Australia has joined the call for all levels of government to engage women business owners and look to them to provide essential products and services in the lead-up to major events, such as the Commonwealth Games.

Sally began her career as a Solicitor, after completing Law (Hons) and Commerce degrees at the University of Melbourne. She has held senior roles at both KPMG and ANZ, as well as founding her own small business which she took to list on the ASX.

Sally’s top priority is bringing the buzz back to Melbourne and driving the city’s economic recovery. She is also committed to helping rough sleepers get more support and a pathway into secure housing, and ensuring Melbourne remains a global leader in environmental sustainability.

In exploring the future, we are also connecting with the past, with this event being held at the glorious Hellenic Museum, Australia’s only museum dedicated to preserving and showcasing Greek art, history and culture.

Book your tickets today for this special lunch event and fill your glass with optimism and endless opportunities.

Sally was the first woman to hold the post of Agent-General for Victoria in the UK, Europe and Israel. She has also served as the CEO for the Committee for Melbourne and Victorian Executive Director of the Property Council of Australia. A passionate Collingwood Football Club supporter, in 2004 Sally made history as the first female board member of Collingwood Football Club.

Sally is involved in a number of charities, currently sitting on the board of the Olivia Newton-John Cancer Research Institute, the Mary Jane Lewis Scholarship Foundation and the Melbourne University Faculty of Business and Economics.

Women’s Network Australia is the longest running membership-based network for women in business in Australia. For over 30 years, WNA has been supporting and women in business. In April, WNA was confirmed as the Australian representative for WEConnect International, a global network that connects women-owned businesses to qualified buyers around the world.